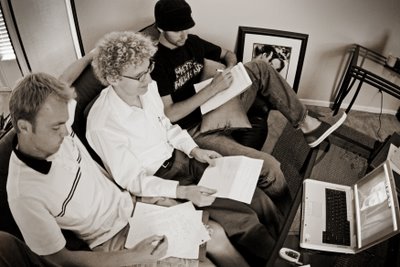 So we certainly haven’t blogged much lately. Its not entirely our faults, though – our blogger has been down here and there. But I’m going to make an attempt to catch up on some weddings here. First – an update on our DVD! As some of you know, we’re releasing an educational DVD this fall! Very exciting! We’ve now finished all the studio shooting and have shot two of three wedding shoots. What you see below is us trying to make sense of almost three hours of studio footage! 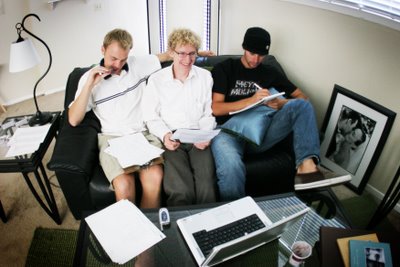 By the way, the third guy you see there is Tim Martin. Tim has joined us as Marketing Director of the DVD project. An old friend of ours, Tim is a recent graduate of Cal Poly San Luis Obisbo and will be taking a job with Deloitte and Touche very soon. We’re really lucky he signed on for this project in between his schooling and job!

And yes – we did squeeze all of us onto that love seat. . . At least we put the married kid in the middle!